The purpose of this article is to evaluate the Vanguard Total Stock Market ETF (VTI) as an investment option at its current market price. Given the market’s recent climb to new highs, I have begun to shift my holdings in a tactical manner, going over-weight in specific areas I feel comfortable with and lessening my broad equity exposure. While the market’s march higher has left me underperforming to some degree, I am generally content with the lower returns given my risk tolerance. With this in mind, I am not optimistic on VTI’s short-term outlook, as I feel the equity markets are too complacent and have pushed to levels that are too high. As such, I expect a pullback before the end of the year and will use that opportunity to reallocate assets to funds like VTI.

My reasons behind this outlook are straightforward. One, money managers have been buying up stocks at a fast clip, which some are projecting is due to a “fear of missing out”, as the latest rally has taken many by surprise. This was a topic I discussed in my last review, and it has so far turned to fruition. While good news for stocks short term, it suggests to me the bullish momentum could subside soon once target allocations are reached. Two, volatility is at a very low level. Last November, volatility had also moved down markedly, only to shoot higher while the market sold off into correction territory. This November, volatility is at an even lower level, which concerns me. Three, we have seen conflicting messages with regard to the U.S.-China trade dispute, and I simply believe investors are not pricing in the downside properly if tensions flare up again.

First, a little background on VTI. The fund is managed by Vanguard and has an investment objective to track the performance of “a benchmark index that measures the investment return of the overall stock market.” Currently, VTI is trading at $156.75/share and yields 1.74%. This is a fund I use to gain broad equity exposure, and I add to or decrease positions based on my macro-outlook. I covered VTI most recently in September, when I maintained a cautious stance on equities. While the market saw some drops in the weeks that followed, the story over the last month has been very positive, and VTI has gained over 3.5% since publication, as shown below:

Given the strength in the market since mid-September, I wanted to take the time to reevaluate VTI and see if I should change my “neutral” outlook on the fund. After review, I have decided to move into more defensive and value-oriented options because I believe VTI’s next major move will be lower, and I will explain why in detail below.

To start the review, I want to discuss a primary reason why I am quite cautious right now. This is the velocity of stock buying from fund managers, which tells me the recent rally may be short-lived. I discussed this possibility back in September, when I noted that cash levels seemed uncommonly high and, if the market continued moving higher, investors may become buyers due to fear of “missing out”. Over the past month, it seems that is starting to play out.

For example, according to data compiled by the National Association of Active Investment Managers and reported by Bloomberg, money managers are buying stocks at a rate not seen so far this year. The exposure index, which tracks the percentage of holdings in equities, has risen quickly from around 60% to above 90%, as shown below: 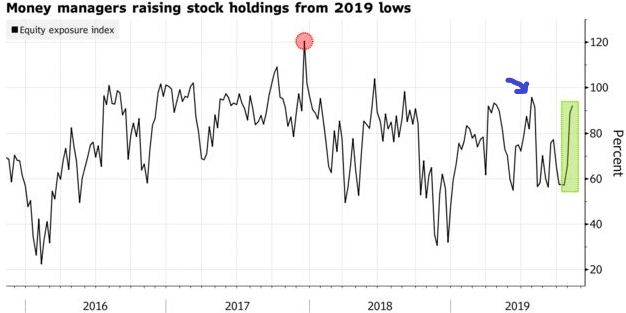 My takeaway here is to be very cautious in following this trend. It seems money managers have made their moves very quickly and in a substantial fashion. In fact, equity positions are now close to the highest level this year. I find it unlikely, considering the indices are at all-time highs, that money managers will push their exposure even further. While certainly possible, I view the recent strength as a bit too much, too fast, and use signals like this as a time to get very cautious with my own allocations.

Volatility Is Quite Low – Too Low For My Comfort

My second point considers volatility, both in isolation and from a historical perspective. Simply, volatility is low right now on an absolute level and when we consider where it has been in 2019. While volatility has been generally low for most of the year, it did spike in August and in early October. Since then, it has dropped markedly and sits near the same low levels we saw in July, right before the August sell-off, as shown below:

Of course, low volatility can stretch on for months, as the graph above also indicates. But whenever it reaches annual lows, that usually signals to me that it will creep up in the very short term. For historical precedent, we have to look no further than twelve months ago to last November. As shown above, volatility dipped down markedly in November, only to ratchet higher through December, as markets fell broadly.

My takeaway here is not that we are going to see volatility spike in the exact same fashion, nor that we will see a 20% correction by year-end. Rather, I want to point out that volatile moves often occur right after lows are reached. Of course, it is obvious that the measure will move higher off the lows, but my point is not that it could simply move higher but sharply higher, and action in August of this year and December of last year is an example. Therefore, I see such low levels of volatility as a time to plan for a downturn and not a time to keep on buying.

Cost To Buy In Keeps Rising

My next point has to do simply with the cost of owning stocks, which has risen over 2019. Despite earnings being broadly positive for major U.S. corporations, earnings ratios continue to move higher as investors bid up the shares. This was an item I discussed in depth back in July, and the premium price to buy the market has only gone up since then. In fact, the S&P 500 currently has a P/E just under 23, which is easily the high of the year, as shown below: 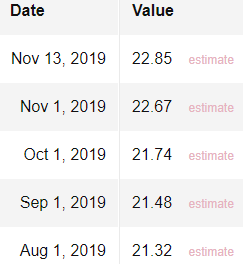 Again, my takeaway is not to flee from equities altogether, but rather to understand the historical multiple stocks have right now. The price to own stocks could surely continue to rise, as it has been throughout 2019. However, similar to the volatility levels, I see annual highs as time for caution. Without continuing corporate earnings growth, this metric will continue to move north, and that tells me to look for undervalued sectors of the market rather than buy broad market funds like VTI.

My final point considers global trade, with specific attention to what is going on with the current U.S.-China trade dispute. While this story has been going on for some time, investors have seemingly reacted positively to news that the U.S. and China could be reaching an agreement, which could also include rolling back tariffs. However, I continue to see conflicting signals from American and Chinese trade officials, and believe the market is under-pricing the possibility of another trade flare-up that could impact stock prices.

My reason for this is primarily due to recent comments made by President Trump. On Monday (11/12), President Trump spoke at the Economic Club of New York and discussed his intentions regarding a trade deal and China. He was quoted in Bloomberg as saying:

To me, these comments indicate President Trump will have no issue with escalating the dispute beyond where it stands currently. With no real indication a deal is going to be reached in the short term, I am surprised by the resiliency of the market in light of such comments.

Furthermore, there are signs the dispute is markedly impacting both trade and confidence. Throughout 2019, imports from China have fallen sharply, but they did pick up mid-way through the year. However, exports have reached annual lows as of September, and exports to China from the U.S. also fell month over month, as shown in the graph below: 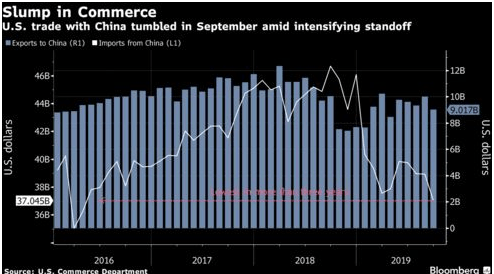 And this is having an impact on consumers. While consumer confidence has remained high, the Expectations Index, which is compiled based on consumers’ short-term outlook for income, business and labor market conditions, declined from 96.8 to 94.9 in October, according to data from The Conference Board. While confidence is high on a historical level, a continued decline in this figure could hurt overall consumer spending. While vital for the economy as a whole, it is also vital for VTI. The fund has direct exposure to the U.S. consumer, with almost a quarter of its assets in the Consumer Goods/Services sectors, as shown below: 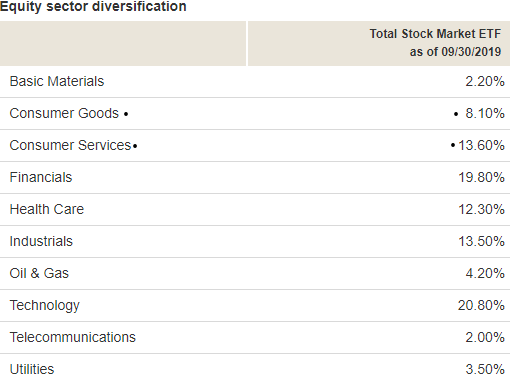 My takeaway here is that investors need to watch the developments with trade very closely and avoid getting too optimistic. Until I see real, concrete progress, I am going not going to ignore the negative headlines as the market seems to have been doing over the past month. If tariffs do go up, as President Trump has suggested could happen, expect to see some real volatility.

My investment style has a bullish bias, but I have multiple concerns about stock prices right now. With multiple headwinds looming that the market seems to be ignoring, I am moving away from broad market funds like VTI and into more defensive positions. While I may miss out on a year-end rally, I am comfortable with that possibility. Stocks have had a great run this year already, and I would rather take some risk off the table to protect gains. Further, I want to have capital ready if the market does pull back, because I believe 2020 will be another positive year for the markets overall. Therefore, my outlook for funds like VTI right now is to wait for a better opportunity in the short term.

Disclosure: I am/we are long VTI. I wrote this article myself, and it expresses my own opinions. I am not receiving compensation for it (other than from Seeking Alpha). I have no business relationship with any company whose stock is mentioned in this article.