After 75bps worth of easing in the Official Cash Rate from 1.5% to 0.75% throughout 2019, the RBA’s November meeting minutes provided the first signal that they may be nearing the lower bound of interest rates after stating that “a further reduction in interest rates could have a different effect on confidence than in the past, when interest rates were at higher levels”. Given that the RBA have effectively ruled out a move into negative interest rates, this suggests that the RBA are reaching their limits with regard to conventional policy (0.25-0.5%) and thus there is a risk that the RBA could consider more unorthodox measures (QE) if economic conditions warrant such action, which would likely come in the form of purchasing assets, such as government bonds.

Talk surrounding the RBA QE have been ongoing for many months now with Governor Lowe commenting back in August that while “unconventional policy is unlikely, it is a possibility”. That being said, market participants will be paying close attention to RBA Governor Lowe’s speech on Nov 26th at 0815GMT, where he will be speaking on “unconventional monetary policy and the lessons from overseas”.

Much like the Australian Dollar, the economy has continued to soften, which had been evidenced by the latest PMI survey dropping into contraction territory despite monetary easing and tax cuts. Alongside this, external factors pertaining to the US-China trade war tensions has also provided a drag on the economy. That said, this raises concerns that the RBA could fail to reach its relatively optimistic forecasts, thus there would be a material risk that the RBA embarks on path of QE in the near future. As a reminder, the latest forecasts from the RBA are based on the technical assumption that interest rates would move in line with market pricing, which as it stands, is hinting at one more rate cut in 2020.

Among one of the key influencing factors on the monetary policy outlook has been the labour market and will likely continue to do so. With this in mind, eyes will be on the unemployment rate, which as of late has moved higher and may continue to do so amid the pullback in job advertisements, thus raising the risk that the unemployment rate rises above the RBA’s of 5.2-5.3%. 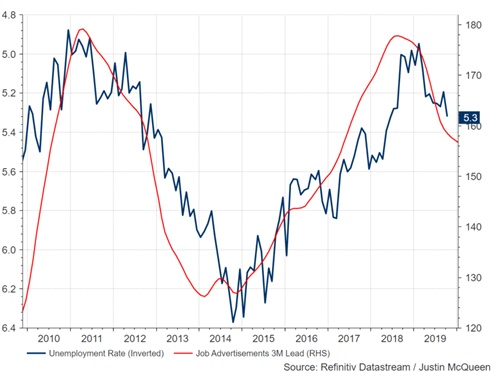 Throughout 2019, the Australian Dollar has showed little signs of breaking out of its downtrend due to in large part the spillover effects from the US-China trade war and thus while an interim trade deal may provide an initial uptick. Given the persistent downside risks tied to the economy, the Aussie slide is likely to stay intact.