Lloyds has been held back by UK economic certainty

I first wrote on Lloyds (NYSE: LYG) back in May (article here) when I cautioned that the persistent UK economic uncertainty brought about by Brexit was likely to weigh on the shares of this most domestic-focused of the UK banks.

This is broadly how things have panned out with Lloyds’ shares being largely unchanged since that article whereas more diversified peers like Barclays (NYSE: BCS) have enjoyed a nice rally (+13%).

My view on Lloyds hasn’t changed: I think it’s a value-trap for as long as top-line growth is absent. It also remains much more sensitive to UK economic downside scenarios than peers. While the P/E is attractive at 8x and the dividend gives a 6% yield, Street estimates for both measures are declining, which makes current multiples potentially misleading. I would continue to avoid the shares and I would point investors to Barclays as a better way to play cheap UK bank valuations. In contrast to Lloyds, Barclays is growing, it has geographic and fx diversification and it is significantly cheaper on P/TNAV.

Lloyds’ share price has suffered as Brexit uncertainty has persisted

A stalling UK economy is not good news for Lloyds

Brexit still hasn’t wrought the havoc on the UK economy many feared but there has been a clear slowdown in recent quarters with 3Q YoY growth being just 1% while house prices are also at a standstill. 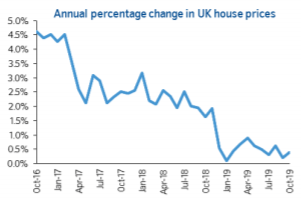 The effect is becoming material for Lloyds as evidenced by recent results. 3Q profits were 8% below Street estimates (Reuters commentary here) driven by a 6% YoY fall in revenues. The company blamed this on lower client activity in its commercial banking business and said that headwinds were likely to persist into 4Q and 2020. 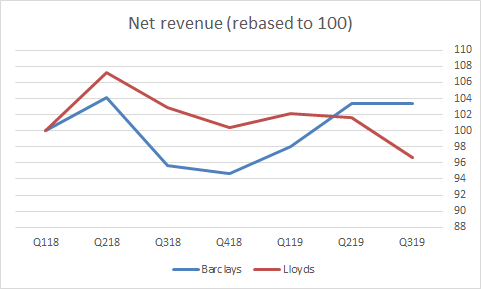 The loss of revenue momentum is becoming progressively greater with sequential growth being negative in four of the last five quarters. 3Q revenues were 4% below their 1Q18 level over a period where Barclays, for example, has expanded its revenue base by the same percentage and posted sequential growth for three consecutive quarters.

While Lloyds lowered its FY19 cost target in the 3Q earnings announcement to try to compensate (now <£7.9bn from previously <£8bn), the reality is the company is struggling to offset the decline in revenues through efficiency measures. Operational leverage was -2% in 3Q (the difference between revenue and cost growth) putting Lloyds towards the lower end of peers. 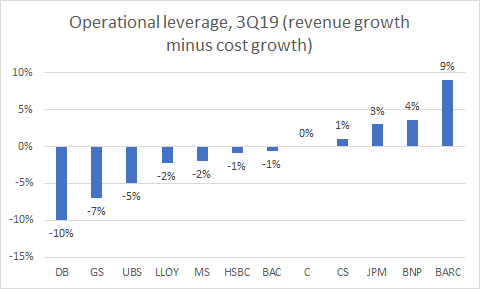 The revenue pressures are largely the consequence of slowing loan growth in economically-sensitive lending categories that Lloyds has targeted in recent years. Credit card volumes, for example, were 4% lower YoY in 3Q having grown 22% in FY18 while other unsecured personal credit grew by only 1% for 9m19 having expanded 6% last year.

As these higher margin lending categories rapidly come off the boil Lloyds has reentered the mortgage market that it has tended to avoid in recent years because of cut-throat price competition and its existing leadership position (c.20% market share). Mortgage volumes were 1% higher YoY in 3Q having contracted in both FY18 and FY19. The result is that Lloyds’ interest margins are declining and it made a small, if symbolically significant cut to its FY margin guidance in 3Q (now ~288ps from previously ~290bps). 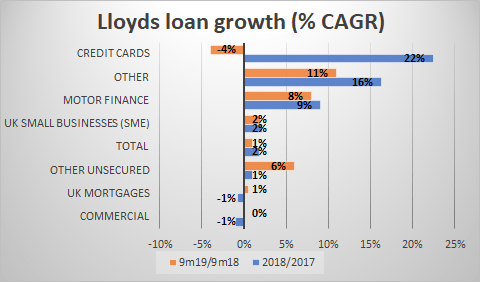 In the absence of revenue growth we are left with a company that is very profitable by banking standards (ROTE was 15.4% in 3Q) but that is stagnating. Underlying profits haven’t seen any growth in over two years and they fell by 12% YoY in 3Q. 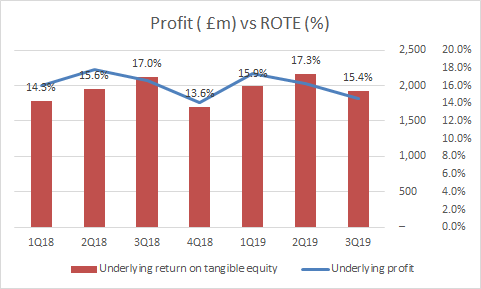 Moreover, current ROTE levels are only being achieved because loan losses are at cyclically very low levels. The 3Q “Asset Quality Ratio” (P&L provisions for loan losses/average lending balances) was 33bps and management has guided for FY19 AQR to be below 30bps.

Against this, Lloyds’ 20-year average loan loss provisioning rate is 75bps and we can probably assume its “normalized” rate is higher than that now given the growth in recent years in higher-risk areas like cards and motor finance. 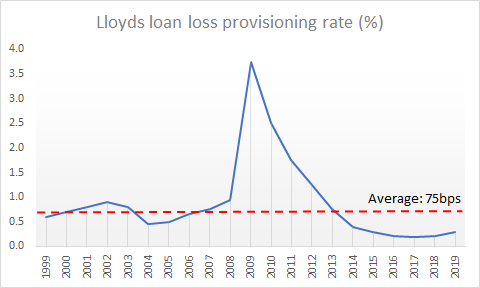 A shift upwards to an AQR level of 75bps rather than the 30bps management is guiding to would reduce profits by ~25% and cut ROTE to ~10%.

On this point it’s worth bearing in mind that Lloyds’ AQR is already on an upward trajectory as weaker UK economic conditions start to pinch corporates and consumers. Excluding writebacks of previous loan loss provisions, new provisions for new non-performing loan exposures (“gross” AQR) have risen every quarter since 2Q18 and were 40bps in 3Q19. A more severe economic slowdown in the UK brought about by a Brexit-dislocation could quite conceivably lead to an upward step-change in Lloyds’ provisioning needs. 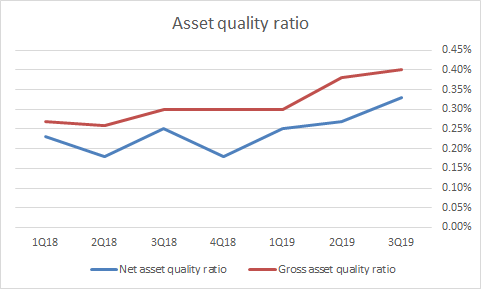 Falling Street earnings expectations are a big headwind for the stock

All of these issues are starting to impact Street earnings expectations. Since I last wrote on Lloyds, EPS expectations for 2020 have fallen by 10%, a big move by any standards. This undermines the cheap valuation argument for the shares since the current P/E multiple of 8x is only relevant if we get no more estimate downgrades – and this looks a brave assumption for all of the reasons I’ve listed above.

Falling EPS expectations also undermine the yield argument for the stock since, at a certain point, DPS expectations will also have to fall. This hasn’t happened yet: 2020 DPS estimates are only 2% lower. But this just means that payout expectations have moved higher. On current Street numbers, 2020 payout will be 50% whereas the company was operating at only 30% just three years ago.

Given that the yield story is such an important component of the Lloyds equity case for many shareholders, any significant reduction in dividend expectations could wreak havoc on the share price. 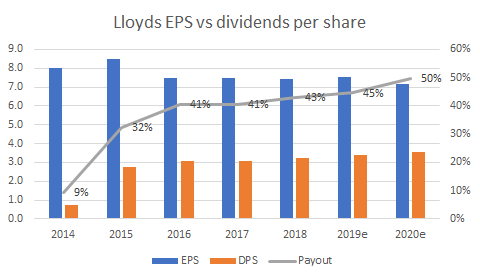 I’m instinctively wary of high yielding banking stocks since history shows that, more times than not, the yield premium closes out not because the share price goes up but because dividends come down. This is the reason I also recommend avoiding banks like ABN AMRO (OTCPK:ABNRY) and Intesa Sanpaolo (OTCPK:IITOF).

Lloyds mirrors the situation of these banks in many respects. It has attractive, dominant positions in many areas of the domestic UK retail banking market and has relatively high profitability. It is also relatively efficient. However, like these peers it is not growing, in fact its top-line is in an accelerating decline. With cost:income low (47% for 9m19) it’s not obvious to me how management can stop the pressure on revenue eroding net profits. In addition, current levels of ROTE are vulnerable to a sharper than expected upward normalization of loan loss levels should the UK economy deteriorate.

The stock trades on 1.15x P/TNAV, which looks reasonable for current ROTE. Indeed if I value the stock on 2020 consensus ROTE expectations of 13% and a 10% cost of equity, then arguably fair value P/TNAV could be as high as 1.3x and the share price 20% undervalued.

However, given the dynamics, I would need a bigger buffer than this to invest in Lloyds today. Specifically I would want there to be upside even in a more bearish earnings scenario. This isn’t evident. The low-point of 2020 Street consensus sees ROTE next year being 10.4%, which on the same cost of equity assumption results in a fair value share price target of 58.9p, exactly the current share price. This isn’t an attractive risk-reward in my view and I will continue to avoid the shares. For investors looking to capitalize on cheap UK bank valuations I think Barclays is a much better bet, trading on just 0.6x P/TNAV and with improving operating metrics. 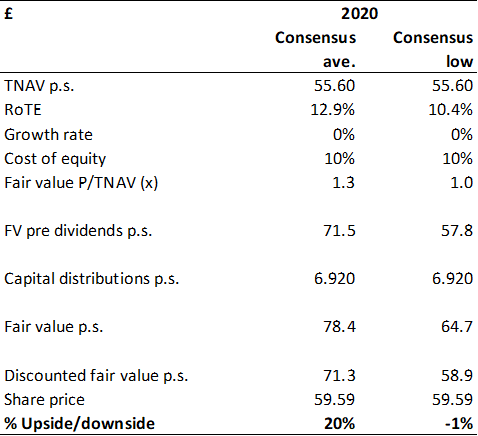 Disclosure: I am/we are long BCS. I wrote this article myself, and it expresses my own opinions. I am not receiving compensation for it (other than from Seeking Alpha). I have no business relationship with any company whose stock is mentioned in this article.