Jumia (JMIA) has faced significant headwinds since listing, including allegations of fraud and a steep decline in share price. While e-commerce in Africa presents Jumia with a large opportunity, it is a difficult business and unless Jumia can fundamentally change the economics of their business, I believe their losses will continue and they will remain an unattractive investment.

Jumia has a serious profitability problem, which makes them a questionable investment even if they become the dominant e-commerce company in Africa. Given Jumia’s relatively small size, a lack of profitability would not be a concern, except for the magnitude of the losses and the fact Jumia is displaying limited operating leverage.

A large part of Jumia’s profitability problem is the cost of fulfillment, which is likely to become an even greater burden as smaller value products are becoming an increasingly important part of sales. If this trend continues, it will be difficult for Jumia to achieve profitability, even if they make improvements in other areas. 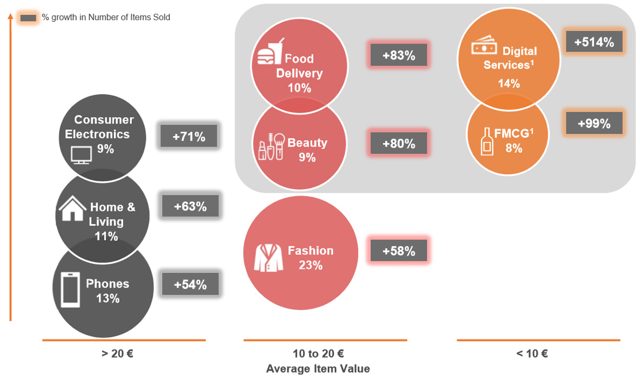 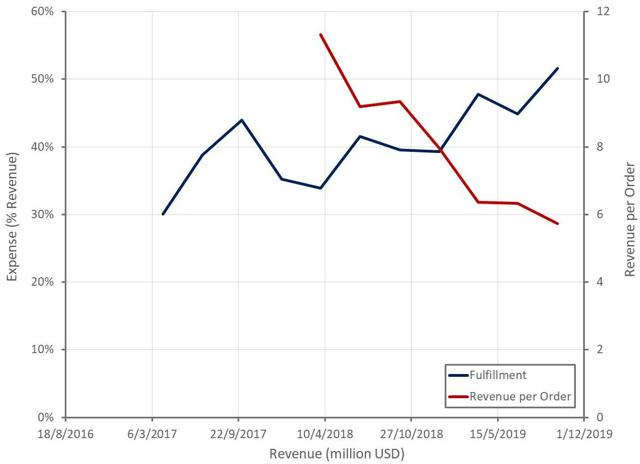 High fulfillment costs are also partly explained by Jumia offering a cash on delivery option, which results in a relatively high number of returns as consumers are often not present at the delivery time. Although cash on delivery is likely an attractive option for customers without access to digital payments or who are still building faith in the platform, it results in lower commissions and higher fulfillment costs.

Jumia marketplace is present in 14 African nations with a total population of approximately 700 million people, representing 72% of Africa’s GDP and 77% of Africa’s internet users. 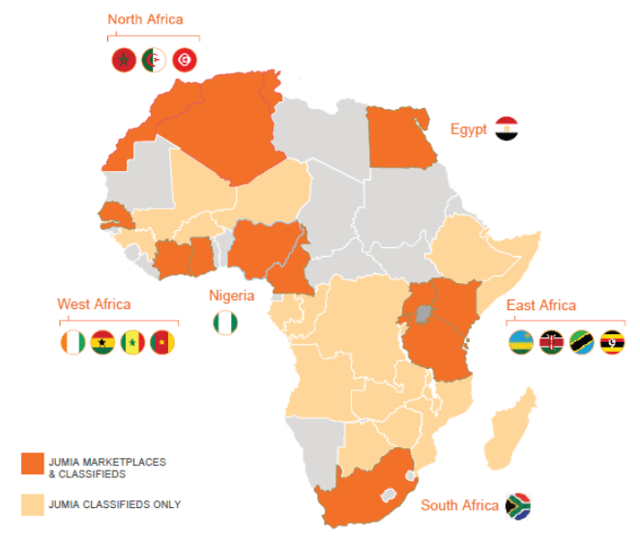 Jumia offers a range of products and services in addition to e-commerce and it is expanding these offerings. 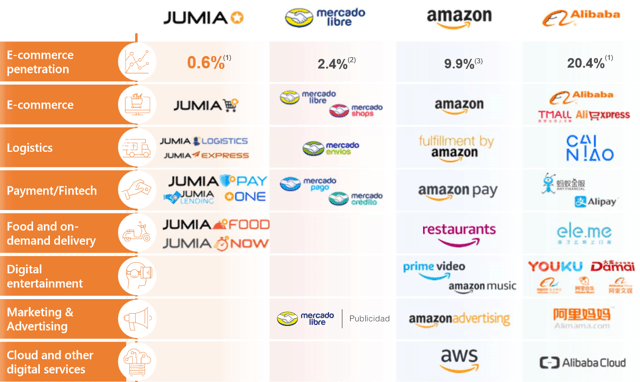 Given the large market opportunity and Jumia’s expanding portfolio of offerings, Jumia’s growth could be expected to be higher. E-commerce in Africa is a difficult business though, as the markets are highly fragmented and have underdeveloped logistics and digital payments capabilities. Many regions do not have an organized address system, making deliveries inefficient and reliant on local expertise. Many countries also have high import tariffs and there is limited ability to source products locally, increasing the cost of e-commerce. 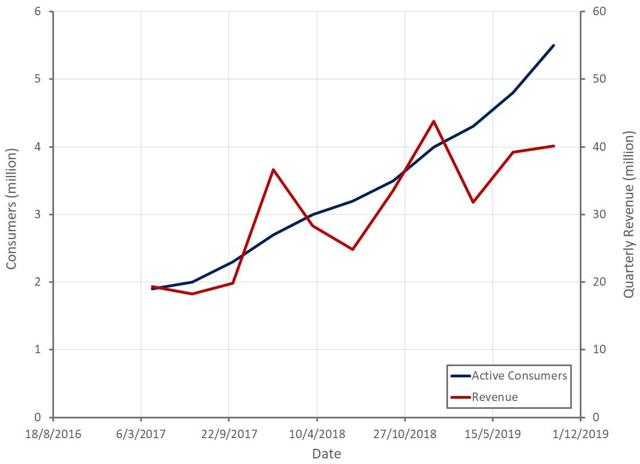 Even though Jumia is growing consumers on the platform and these new users are placing more orders, revenue per consumer is declining. Jumia has shown an ability to increase consumer spending the longer a consumer remains on the platform, but if consumers continue to decline in value it will be difficult for Jumia to maintain the growth rate. 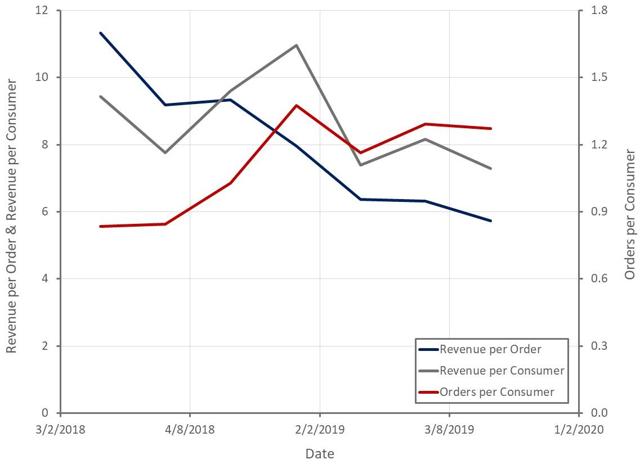 Jumia continues to increase the importance of their marketplace business and is becoming less reliant on first-party revenue. The move away from first-party revenue puts pressure on top-line growth but increases profit margins, which overall is fairly neutral for profit. 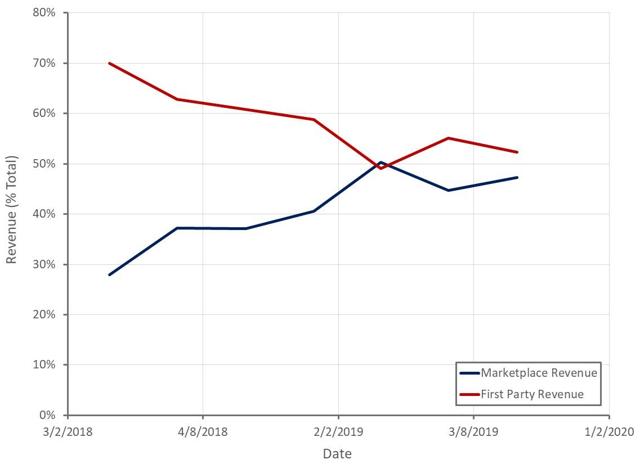 Jumia’s marketplace is becoming increasingly reliant on fulfillment and advertising for revenue. Advertising should be a high margin business, and this could be a significant contributor to profitability for Jumia as they continue to grow their user base. Rising fulfillment revenue is a concern though, as fulfillment is a low value-add activity which Jumia outsources and likely makes little or no money from. 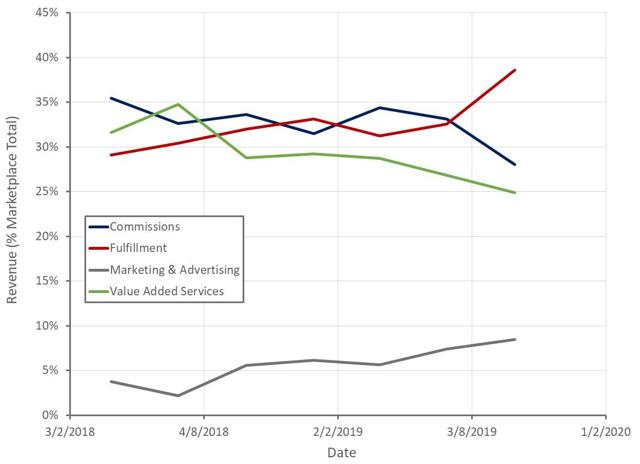 Jumia is often referred to as the Amazon (AMZN) of Africa to give a sense of the company’s potential. I believe this is a lazy analogy which ignores the unique issues Jumia faces and the fact that Amazon is an extremely well-managed company that was in the right place at the right time with the right product. A comparison of the financial performance of Jumia and Amazon highlights how different these two companies are and the obstacles Jumia still needs to overcome before the company is successful.

Amazon focused on building out infrastructure which would allow the company to be dominant in the long run. Jumia is taking an asset-light approach and outsourcing as much as possible. This lowers their capital requirements but ultimately will result in higher costs and a smaller competitive moat. Jumia is trying to deploy their platform in 14 different markets which present their own unique challenges. Because of this Jumia is likely to incur significantly larger losses than Amazon and growth is likely to be much lower. 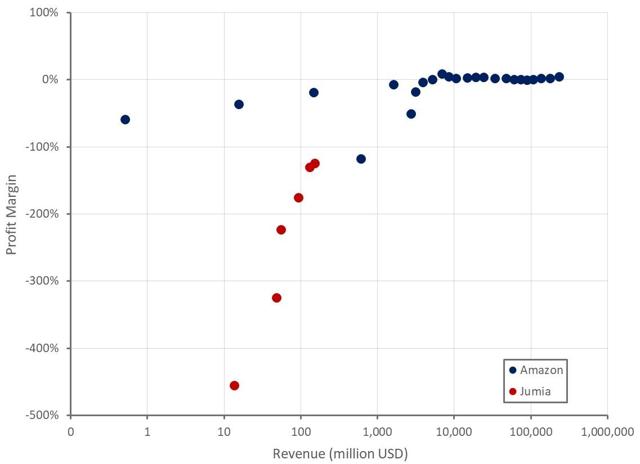 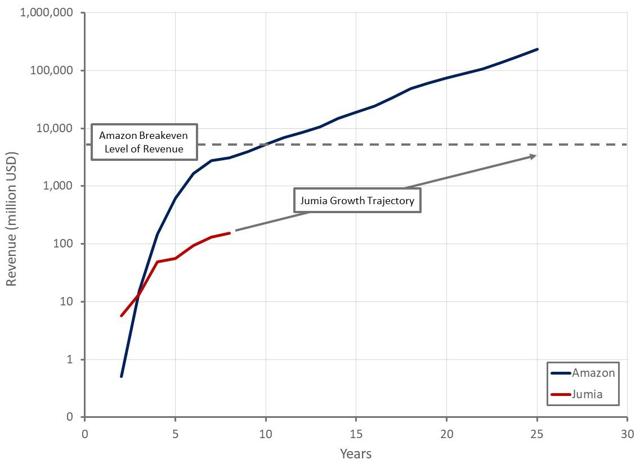 Even if Jumia successfully becomes the dominant e-commerce platform in Africa, I estimate they will need to raise $5-10 billion in capital before they reach sustainable profitability. At Jumia’s current share price, this would result in extreme dilution for existing shareholders with at least a 10-fold increase in shares outstanding required. 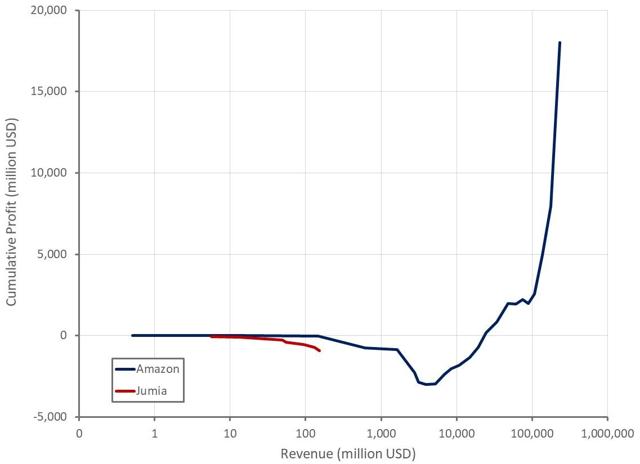 Given the likelihood of dilution, it is difficult to see Jumia as an attractive investment, even if the business is successful. Jumia must radically alter the economics of their business and in particular reduce the burden of fulfillment costs. Given the company’s potential for further losses, I find it difficult to estimate a value. From an investment perspective, it appears Jumia has entered the African e-commerce market too early, resulting in large losses and restrained growth. Investing in Jumia at this point is highly speculative and to pay off would likely require Jumia to rapidly expand in areas like advertising and financial services.