The EIA released the latest edition of their Electric Power Monthly on October 24th, with data for August 2019. The table above shows the percentage contribution of the main fuel sources to two decimal places for the last two months and the year 2019 to date.

The graph below shows the absolute monthly production from the various sources since January 2013, as well as the total amount generated (right axis).

The chart below shows the total monthly generation at utility scale facilities by year versus the contribution from solar. The left hand scale is for the total generation, while the right hand scale is for solar output and has been deliberately set to exaggerate the solar output as a means of assessing its potential to make a meaningful contribution to the midsummer peak. In August 2019, the estimated total output from solar, at 12,055 GWh, was 2.76 times what it was four years ago in August 2015. 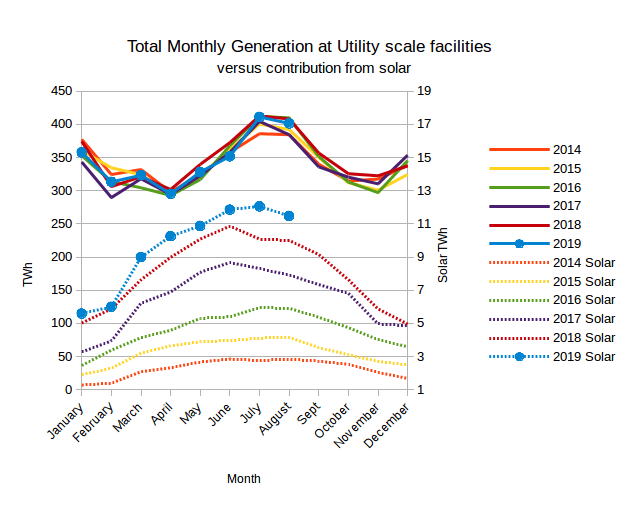 The chart below shows the total monthly generation at utility scale facilities by year versus the combined contribution from wind and solar. The left hand scale is for the total generation, while the right hand scale is for combined wind and solar output and has been deliberately set to exaggerate the combined output of solar and wind as a means of assessing the potential of the combination to make a meaningful contribution to the year round total. 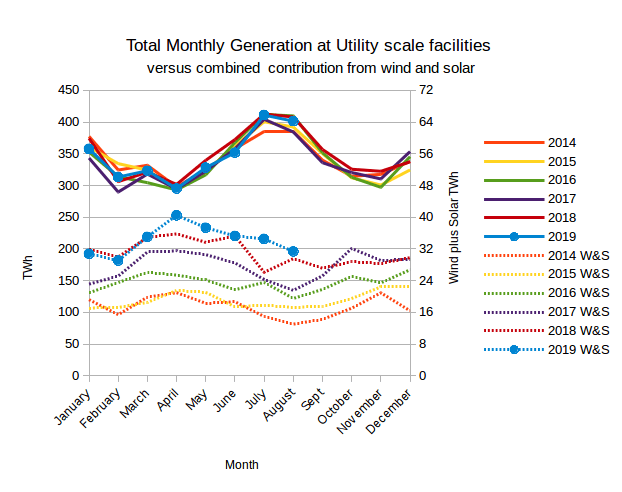 The chart below shows the percentage contributions of the various sources to the capacity additions up to August 2019. In August, Wind contributed 65.32% of new capacity, with 24.9% of new capacity coming from Solar. Batteries contributed 2.19% with Petroleum Liquids contributing 2.07%. A 50 MW plant owned by Cleco Power that generates power through waste heat recovered from an existing carbon black facility in Louisiana, owned by Cabot Corporation, fell into the category All Other, making up the remaining 5.52% of new capacity. Natural Gas, Solar and Wind made up 90.22% of new capacity in August. Natural gas and renewables have made up more than 95% of capacity added each month since at least January 2017. 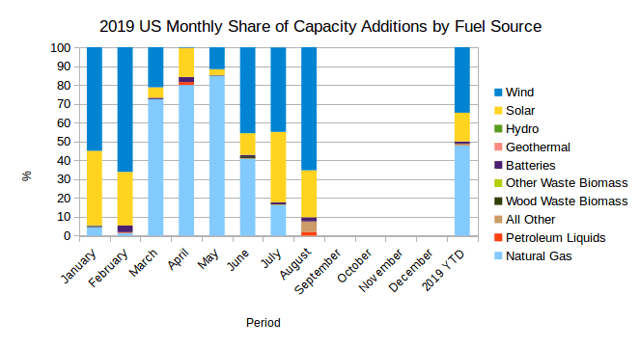 The chart below shows the monthly capacity retirements up to August 2019. In August, the largest share of retirements reported was a 103.8 MW turbine at the Wanapum Dam hydroelectric development in Washington state, where the ten 103 MW turbines are being replaced by 122 MW units. Three units amounting to 6.9 MW powered by Landfill Gas were retired, one in Pennsylvania and two in New York state. The remainder of the retirements were all fueled by Petroleum Liquids and consisted of one 400 kW internal combustion engine driven generator in Alaska, five internal combustion engine driven generators amounting to 6.1 MW in the City of Albany, Missouri, and two combustion turbines amounting to 5.7 MW in Nantucket, Massachusetts. 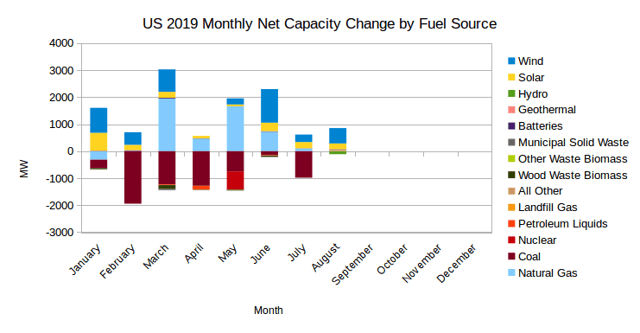 Below is a table of the top ten states in order of coal consumption for electricity production for August 2019 and the year before for comparison. 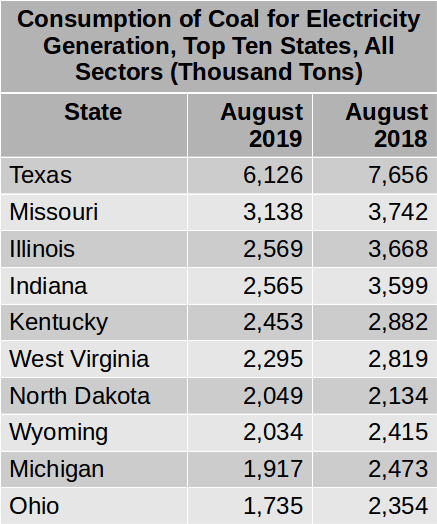 Editor’s Note: The summary bullets for this article were chosen by Seeking Alpha editors