Generally owners take midstream companies public when they need to gather in some tax-free (or mostly tax free) money. Hess Midstream (HESM) is the latest example of this maneuver. Hess (HES) needed some cash to help fund its commitments with the partnership drilling off Guyana. The discoveries have previously been noted in past articles. But the really expensive part is getting the production from those offshore wells to market so the oil can be sold. Many times, that “hookup” process is every bit as expensive as drilling the original wells. Throughout the process Hess has kept a strong cash position. The latest financial maneuverings with the midstream apparently assure the company a continuing strong cash position to cash in on the oil production bonanza to follow.

The partners in the midstream operation are about to pick up an immediate paycheck in excess of $500 million.

Note that the leverage will remain relatively modest for a midstream company. The ongoing capital projects assure a decline in the leverage to some very conservative levels next year. Hess has a large presence in the Bakken and intends to grow that production significantly through 2021.

The much larger picture is the increase in liquidity for Hess. Those midstream units that are issued in the combination represent some relatively quick cash resources should the need arise in the future. Both Hess and its partner have the ability to sell shares at any time should the need arise.

That will not necessarily cap growth prospects. But it is a concern going forward that Hess will use favorable midstream pricing to raise cash by selling the units to the public that were gained in the transaction.

It should be also noted that Hess will probably have a basis gain (or it may be recorded as a material distribution received) on this transaction whether or not it is taxable as a result of selling the midstream assets to the partnership. The partnership will convert to a corporation that is not expected to pay taxes for several years. The transaction to the public is expected to be tax free. The actual accounting though for Hess is far more complicated than these simple few sentences. Usually if possible, the goal is to make the balance sheet look better. Deconsolidating the midstream debt may be another benefit depending upon the Hess options chosen in the future.

Hess is positioning itself to handle the requirements of a major oil production increase that the Guyana successes indicate will happen over the next decade. It is important for Hess Midstream’s investors to note the finance needs of a large material (soon to be) stockholder when considering the investments.

The guidance itself is positive for the midstream company. 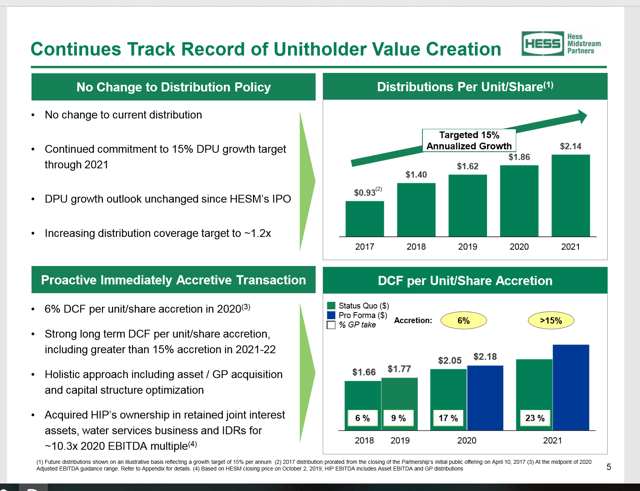 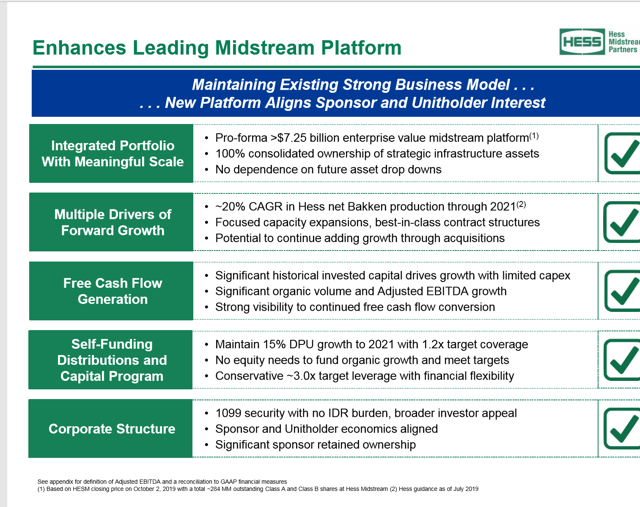 Note that the distribution growth is more than adequate. That would imply a decent appreciation potential of the stock as well. However, should the two main shareholders decide to sell shares to the market, there could be periods of midstream pricing weakness that would follow.

Long term, the growth prospects appear to be very reasonable. Bakken operating costs have become competitive with other basins and there are no takeaway capacity issues that plague Permian operators from time to time.

Best of all, the growth will most likely come from acquisitions and self-funded projects. Hess at the current time does not intend to drop down assets. Drop-downs tend to be more expensive than self-funded expansions. Hess needs the cash flow from the Bakken to help fund the production expansion offered by the Guyana joint venture.

This partnership provides a funding avenue for the midstream requirements while freeing Hess to concentrate on the exploration and production requirements in the future. Both Hess and hence the midstream may grow faster with the current organization.

The partnership has an aggressive growth agenda to execute over the next couple of years. 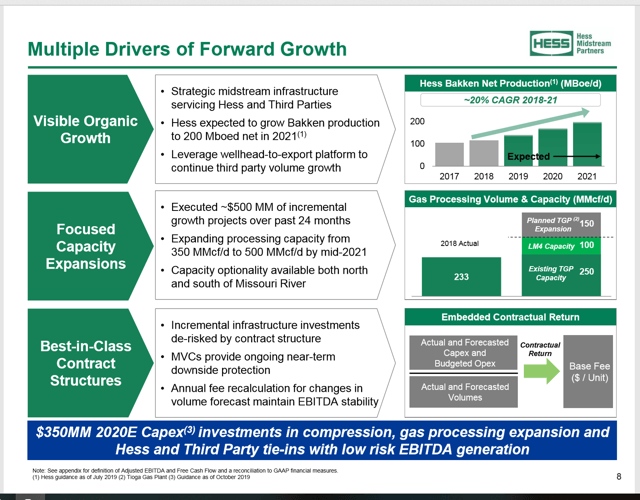 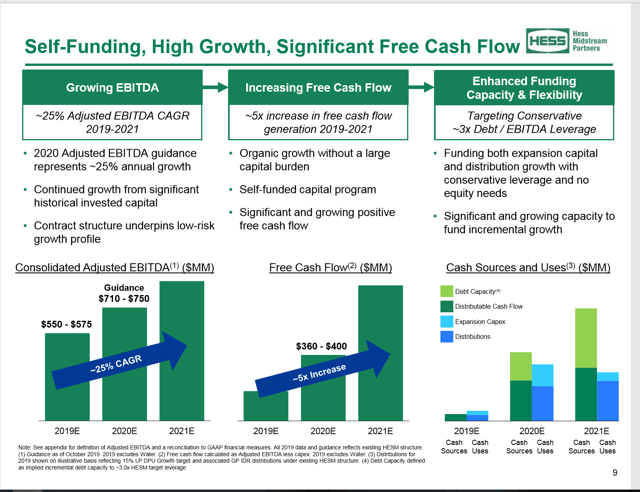 The Bakken supplies a significant amount of the Hess cash flow at the current time. That will change as the Guyana drilling successes begin production. But in the meantime, the aggressive capital agenda should fund the increasing cash flow shown above. What is unknown is the effect of increasing capital needs of the Guyana joint venture. Three or four years down the road, the Hess Midstream partnership could grow more slowly until the Guyana capital needs begin to decline.

At that point, Hess will have a lot of cash flow to deploy or return to shareholders. So partnership growth could then accelerate to current levels. A lot would depend upon the basins served and the Hess corporate strategy in the future. The point is that there is some risk of slower growth towards the end of the five-year horizon.

For roughly the next three years, this partnership has a very bright future. Once the cash demands of the Hess partnership with Exxon Mobil (XOM) begin to dominate as the Guyana production comes online, there could be a de-emphasis of the Bakken and other land-based unconventional growth.

However, the water handling segment is a relatively small part of the midstream business at the current time. That business could grow significantly as the Bakken production ages and more water is produced with the ongoing production. Oftentimes, water production per well turns out to be a much larger source of income than the actual midstream product production revenue stream.

What is clear is that there should be at least 15% annual distribution growth for the next three years. That distribution growth should enable share appreciation so that the combined return is in excess of 20%. The low leverage makes this a very appealing investment.

That growth could slow to a combined 10% a year for a few years towards the end of the five-year period. A lot depends upon what the midstream management decides to undertake in terms of services offered to Hess. Still that would be an overall attractive long-term return for income investors. This appears to be one of the more appealing investment opportunities at the current time.

I analyze oil and gas companies and related companies like Hess Midstream in my service, Oil & Gas Value Research, where I look for undervalued names in the oil and gas space. I break down everything you need to know about these companies – the balance sheet, competitive position and development prospects. This article is an example of what I do. But for Oil & Gas Value Research members, they get it first and they get analysis on some companies that is not published on the free site. Interested? Sign up here for a free two-week trial.

Disclosure: I am/we are long HES, HESM. I wrote this article myself, and it expresses my own opinions. I am not receiving compensation for it (other than from Seeking Alpha). I have no business relationship with any company whose stock is mentioned in this article.