The British Pound is climbing quickly after the latest YouGov poll revealed that UK Prime Minister Boris Johnson and his Conservative Party are estimated to win a 68-seat majority over their primary opposition – MP Jeremy Corbyn and his Labour Party. The YouGov poll sparked a sharp spike in GBP prices considering it was the most accurate poll in predicting the 2017 general election results and thus warrants greater credence.

With Boris Johnson and the Tories expected to win 359 seats – much greater than the 211 seats estimated to be championed by Labour – UK economic outlook is turning more optimistic and likely boosting the Pound Sterling. This is under the assumption that the December 12 general election results will provide an outright majority in Parliament so MPs can finally come to a consensus on Brexit and break the longstanding impasse that has crippled the UK economy. 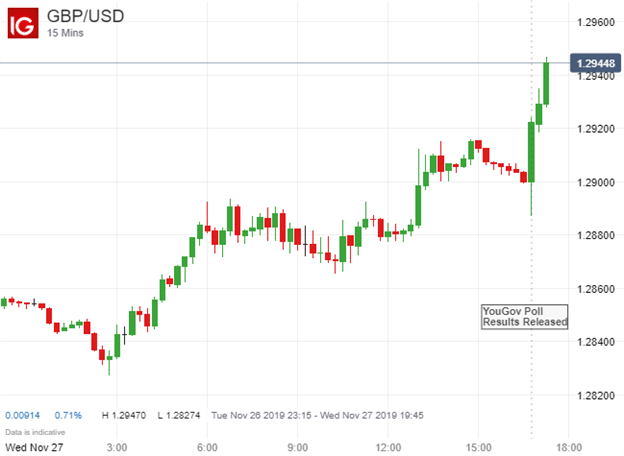 GBP/USD edged higher throughout Wednesday trade, but the latest YouGov Poll results exacerbated upside recorded by the British Pound. Specifically, spot GBP/USD prices spiked well over 30 pips from the 1.29 handle immediately after the election poll estimates crossed the wires. The cable is currently trading at intraday highs with the British Pound still climbing. Currency options traders were pricing an expected move of +/- 62 pips judging by GBP/USD implied volatility for the overnight tenor. 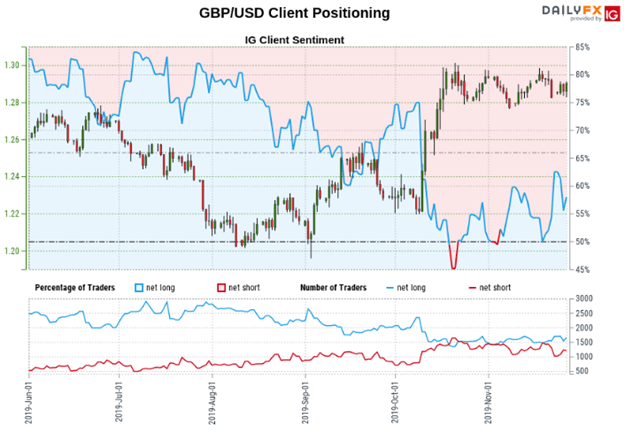 We typically take a contrarian view to crowd sentiment, but recent changes in British Pound positioning gives us a mixed trading bias toward spot GBP/USD price action. This is compares to the most recent COT report which showed spot GBP/USD speculative futures traders continue to hold a net-short position.

Connect with @RichDvorakFX on Twitter for real-time market insight